In autumn 2008, a student from the University of Applied Sciences Rapperswil presented a simple exam application at the IML, but it was installed on an unusual device - the then released iPhone 1. Initial tests showed that the size and resolution of the device were not suitable for displaying the complex OSCE checklists.

However, the idea of digitally supporting the previously paper-based and error-prone process of clinical skills (CS) examinations was happily taken up. In quick succession and in close cooperation with the CS experts of the Assessment and Evaluation Department (AAE), we subsequently developed various prototypes of digital OSCE applications and tested them in our in-house usability laboratory.

The detailed requirements analysis soon had to be extended from the pure software specifications to specifications for hardware. It turned out that the devices available at the time were all unsuitable for all-day use: batteries that discharged too quickly, reflective screens, and many other problems occurred with the different device classes. For example, the underside of a laptop became so hot during continuous operation that the test person was in danger to suffer burns during test sessions.

Lucky for us, the first iPad was introduced at that time. It soon became clear to us that this device was superior to all those tested so far and that we would like to develop an application based on it.

From 2009 to 2013, the development and roll-out of EOSCE (and its predecessors) was supported by the "AAA-SWITCH" funding programme. Together with the University of Applied Sciences Rapperswil and its developers, as well as various application partners (medical faculties of Zurich, Basel, and Lausanne, ETH Zurich, Bern University of Applied Sciences), EOSCE was further developed in three phases and the roll-out into the examination process was prepared.

During the entire development phase, it was very important to us that the applications had an optimal usability, i.e., that they were as easy, efficient, and error-free to use as possible. This was of particular benefit to the examiners, who are under a lot of pressure during the long examination days and should concentrate on the candidates - not on an application that is supposed to support them.
The development was therefore accompanied by a team of usability experts from the IML (https://www.usability.unibe.ch/) and Rapperswil, who pursued a strict user-centred design (UCD) approach. Each new version was first evaluated in the usability lab and later in the field with examiners and was adapted according to the findings.

The project was also accompanied scientifically. Various studies, the findings of which were also published in scientific publications, examined serveral aspects of EOSCE, e.g. the interaction design, the use and the acceptance of the software and the practical effects of switching from paper to tablet. They led to interesting results, for example, the cognitive load of examiners decreases when working with EOSCE compared to paper-based checklists.

In 2012, the time had come to conduct the first examinations at our faculty in Bern with EOSCE. Even in the introductory phase, we kept encountering unexpected problems. For example, the WLAN coverage in the examination rooms was often so poor that we first experimented with our own WLAN routers and then equipped EOSCE with a complete offline mode.

Operating iPads, which were new at the time, was not only met with enthusiasm. For example, at the beginning of an examination we had to convince an examiner who insisted on assessment with paper checklists to use the iPad (he then said goodbye enthusiastically in the evening and said he wanted to buy such a device for himself today). Within a short time, the examiners got used to the unfamiliar touch operation. The results of the evaluations also showed that the examiners prefer the digital evaluation with EOSCE.

After EOSCE was established at the Faculty of Medicine in Bern, other faculties in Switzerland also introduced EOSCE in the following years. And it was not only in Switzerland that the advantages of digital assessment were recognised: EOSCE was also in demand internationally by various institutions.

In September 2017, the time had come for the Federal Examinations in human medicine to be switched from the paper-based process to EOSCE. Because the organisation of these examinations with five different locations and two languages is much more complex than a faculty examination, individual steps in the existing process had to be adapted.
But it was in this examination that the advantages of conducting examinations digitally showed very clearly: the distribution of the examinations across the 5 locations is much easier and more secure with EOSCE; the exam can be monitored directly in real time centrally; it is no longer necessary to scan the examination sheets and thus the analysis can be started immediately after the examination.

Since then, EOSCE has established itself as a tool for both local and international examinations and evaluations. After more than 10 years, we had to realise that the code base of the applications, which has been updated and extended many times, is no longer maintainable. Also, the requirements of the users are becoming more and more advanced, therefore we decided in 2020 that we had to develop a completely new system on a new code base.

“EOSCE Valuatic", the successor to EOSCE, was first released in December 2021. It is a system that allows more degrees of freedom in the design of examinations and checklists and also offers a lot of new functionality. In the first examinations, Valuatic has proven to be very reliable and has been enthusiastically received with its new possibilities. 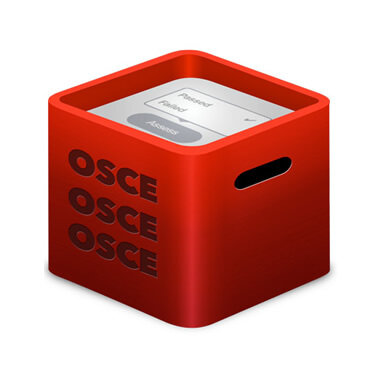